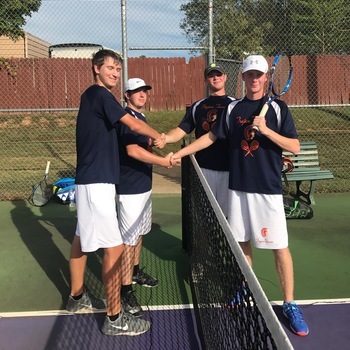 The Trojan tennis team fared well in the District Tournament at the University of the Ozarks on October 5. Andrew Eveld and Robert Remy got a first round bye, then defeated a Pottsville doubles team before losing to a Mena duo. In the match for third place, Eveld and Remy defeated the other Trojan doubles team (Matthew Stites and Daniel Haunert) and will compete in the 4A State Tournament on October 16-17 at Arkansas Tech University. Stites and Haunert defeated a Shiloh Christian team and a Prairie Grove duo. After a loss to a Pottsville team, the Subiaco duo then lost to Eveld/Remy in the match for third place. Br. Adrian, the Trojan coach, noted, “Kudos to Anthony Lam, Stites and Haunert. They played their best matches of the year.”